Update: If you think this is a great idea, there are many ways you can support me in it.

I found out about the 2014 Great March for Climate Action from my long-time friend, colleague, and housemate Tom Atlee. He marched in the 1986 Great Peace March, which as I understand it is a substantial part of the inspiration for next year's march. I've heard many of his stories about it, and have always found such a journey very appealing, both for the potentially profound evolution among the participants - individually and collectively - and for the direct personal effects of walking for so long (eight months). I've visited with friends who were in the middle of similarly long walks and I really want some of the glow and groundedness I saw in each of them.

As for climate change, I remember playing with James Hansen's temperature rise data over 20 years ago when I worked at a math & science education research and development company. It was convincing enough then that I took it seriously. Even if the far clearer data available today was not, the social, economic, and other changes needed to reduce our carbon footprint have life-changing benefits. So even if it turned out that pumping carbon into the atmosphere wasn't a big mistake, I would still want us to pursue most if not all of the same solutions, to address issues such as pollution, land and water degradation, overly-centralized power (social and energy), and alienation from ourselves and from the rest of nature.

But I am not much of an issues activist, I'm more of a process activist, aiming to improve how we make decisions and generally work together. I share this with Tom, the friend who told me about the march. He made that shift because of his experience on the 1986 march, which fell apart when the sponsoring organization went bankrupt two weeks after leaving Los Angeles. One third (400) of the marchers refused to give up and self-organized their way across the rest of the country, wrestling with hundreds of challenging issues and finding their way through, over, or around each one. He was blown away by the persistence, creativity, and group processes that made this possible, and became convinced that the same sort of approaches were perhaps the only way for us to handle the most challenging issues that face us - war, ecological disaster, and other systemic failures of our current way of life.

I share this perspective. If I think about issues, I care about dozens of them, and see that we address all of them far better when we put substantial attention on how we think about them, how we talk about them, and how we work on them with our allies and with those who are not yet part of the solution. Process to me includes everything from personal development, interpersonal communication, and group dynamics/facilitation, and good dynamics at every level up from there - families, neighborhoods, communities, networks, bioregions, nations, and globally. Together Tom and I have invested over 25 years in the Co-Intelligence Institute, which focuses on good process at some of the largest scales.

So if I'm not an issues activist, why go on this march, focused on this single issue of climate change?

Because it is an issue which, if not addressed adequately in the next few years, promises to end our very existence or at the very least, kill off the vast majority of us and our entire way of life - the bad and the good.

And I care. I care about people not only surviving, but actually having the chance to thrive, to make the most of our lives, and benefit from everyone around us thriving, and from the many beautiful complexities we have developed (while hopefully learning to adapt away from the many negative complexities we've also developed). 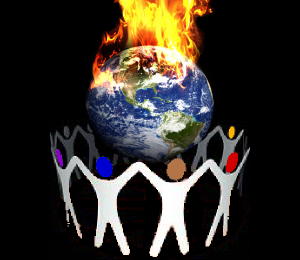 In the last few years several friends I respect deeply have researched heavily into what scientists are telling us about climate change, and have become convinced that we are already guaranteed to face substantial challenges to humanity, even if we stopped burning carbon today. Since we are instead continuing to look for more and more carbon to burn, we seem locked into even more severe suffering and dislocation, and potential extinction.

Quite simply, we are not even close to taking climate change seriously. If we were, we would undertake some fundamental shifts in how we think of ourselves and our relationship with the rest of the natural world. We would stop tearing down perfectly good buildings to build new ones, we would focus on reduce and reuse far more than on recycle, we would eat far less meat and see more bicycles on the road than cars, we would not be talking about natural gas or clean coal as solutions, and we would not easily dismiss nuclear or geoengineering solutions despite their serious risks. This is an all-hands-on-deck emergency!

The march is a powerful opportunity to Wake People Up to this, to raise the ruckus and organize the power necessary to either make the powers that be change course, or simply make the changes ourselves if they won't.

I am proud to be taking the first steps on this journey with you, and look forward to our conversations about all of this and more as we make our way across the continent, a travelling alarm clock of love.